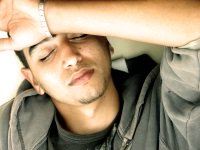 Narcolepsy symptoms typically begin to appear sometime between the ages of 15 and 25. Yet, they can show up when you are younger or older, especially if there is a genetic component or a hormonal imbalance that serves as the trigger.

In the early stages of this sleep disorder, the symptoms of narcolepsy are usually mild and take the form of excessive daytime sleepiness. This is also the most common marker of narcolepsy.

It is important to note that this feeling of exhaustion – often accompanied by memory and concentration problems, anxiety, depression, and/or an over-emotional state – may be indicators of other types of sleep disorders such as insomnia or sleep apnea.

So if feeling exhausted all the time is your only symptom, you could be suffering from any of these sleep-related problems.

Yet with narcolepsy, this early symptom is usually followed by sudden and uncontrollable urges to sleep, which can come over you anytime, anywhere. If you fall asleep suddenly while driving, cooking, exercising, or during any activity, it is obviously dangerous to you and those around you.

In addition, individuals with narcolepsy may experience the following symptoms.

In addition to the dangers associated with the above symptoms, narcoleptics are often sleep-deprived, which produces other serious health risks. Therefore, you need to see your doctor right away so that you can get a correct diagnosis and start treatment.

Once your symptoms are under control, you can expect the quality and quantity of your sleep to improve dramatically. In turn, you will feel better and enjoy life more.

What is Narcolepsy?
Causes of Narcolepsy
Sleep Disorders

CONTACT INFORMATION  |  ADVERTISING INQUIRIES  |  PRIVACY POLICY & TERMS
Copyright 2008-2023 by Sowder Group LLC. Content and images may NOT be reproduced. Better-Sleep-Better-Life.com is for informational purposes and does not serve as medical/health advice, diagnosis, or treatment. The site publisher/owner is not liable for your use of site information. Always consult your physician for all sleep and health concerns.