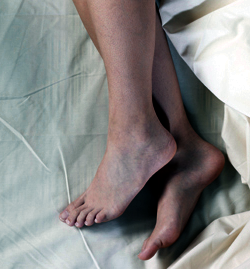 You may suffer from periodic limb movement disorder if you experience repetitive jerking or twitching in your lower or upper extremities during sleep.

These uncontrollable movements typical repeat less than a minute apart and can disrupt sleep. While commonly experienced in the legs or arms, the involuntary movements can occur in other parts of the body, as well.

Also referred to as sleep myoclonus or nocturnal myoclonus, periodic limb movement disorder (PLMD) is different from the better-known restless legs syndrome (RLS). RLS occurs when individuals are awake. It is a sensorimotor disorder that involves an irresistible urge to move the legs, arms, or other body parts. Sensations of creeping or crawling often accompany the symptoms.

With PLMD, the person with the problem is often unaware of the issue. As with many sleep disorders, the bed partner or observer notes the unusual activity. The sleeper may twitch or shake in the moments prior to actual sleep.  The movements may be experienced throughout the night and come in clusters that last for a few moments; however, some movements may last hours.

The sleeper may also have symptoms like those of RLS, including sensations in the thighs and calves. Additionally, individuals with PLMD may experience insomnia and daytime sleepiness that result from poor sleep quality.

PLMD may also be a warning sign of a serious health problem such as diabetes, anemia, or kidney disease. That's why it is important to see a doctor if you suspect you have the condition. Some studies have indicated a link between limb movement disorder and Parkinson's disease, as well as other similar neurodegenerative disorders.

Medications such as antidepressants, antihistamines, and antipsychotics may worsen this disorder. Treatment generally is not warranted unless RLS is also apparent, or daytime fatigue is an issue. Addressing any underlying health concerns may also alleviate symptoms.

A sleep study may assist a physician in efforts to diagnose and treat the limb movement disorder. When treatment is necessary, physicians often use medications that are used to treat Parkinson's disease. Additionally, dietary changes, such as avoidance of caffeine, may be helpful.