While there are numerous causes of snoring, the end result is similar: a series of snorting or grunting sounds of various levels and intensities that are made during sleep. Snoring occurs when the throat, tongue, and muscles in the roof of the mouth relax, obstructing the airways. The obstruction causes air turbulence when you breathe. Snoring affects people of all ages, though it can worsen as you get older.

According to the Occupational Health and Safety Administration (OSHA), some snorers can even produce noises that are louder and higher in decibels than are considered safe according to working environment standards.

Nearly half of all adults snore and about half of these people who snore do it loudly and frequently. Approximately 10 to 15% of young children, most of whom have enlarged tonsils and adenoids, snore on a regular basis.

Factors that Cause Snoring 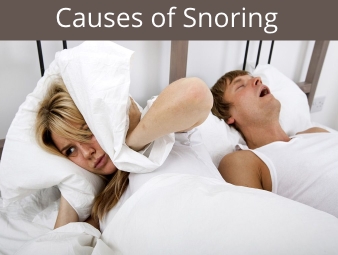 The causes of snoring can be attributed to a variety of factors:

Obstructive sleep apnea. Obstructive sleep apnea is characterized by loud, frequent snoring and intermittent pauses in breathing. This is a potentially serious sleep disorder that needs to be evaluated by a doctor. There are significant and serious risks associated with sleep apnea and treatment can relieve your symptoms and have long term health benefits.

Age. Aging increases the potential for snoring because the throat and tongue muscles become more relaxed with age.

Smoking. Smoking contributes to and causes snoring because the smoke irritates the mucous membranes in the airways, causing them to become inflamed and swollen.

Alcohol consumption. Alcohol relaxes the throat muscles and facilitates airway obstruction, so drinking too much alcohol before bedtime can contribute to snoring.

Being overweight. People who are overweight often have bulky throat tissue, which narrows their airways.

Medications. Certain medications, such as sleeping pills, may cause the throat and tongue muscles to become relaxed and fall back into the airway.

Mouth anatomy. Having a long soft palate, tonsils, and/or uvula (the tissue that dangles at the back of your mouth) can contribute to snoring because these structures can block the airways and vibrate during sleep. Deformities of the nose, such as a deviated septum, can also cause snoring

When to Seek Treatment

Occasional snoring is generally nothing but a harmless nuisance, but loud, frequent snoring is most often associated with obstructive sleep apnea, a serious disorder that poses major health risks.

People who have sleep apnea wake up frequently in the middle of the night without even realizing it.

Sleep apnea lowers oxygen levels in the blood, leading to a rise in blood pressure. Leaving sleep apnea untreated may cause enlargement of the heart and increase the risk of heart attack and stroke.

Children who have obstructive sleep apnea tend to display problematic behavior, such as hyperactivity. Furthermore, according to several studies, children with sleep apnea are more likely to score lower on tests measuring memory, intelligence, and the ability to pay attention.

People with sleep apnea are at higher risk of developing diabetes than people who don’t snore because their bodies produce adrenaline when they are under stress from not getting enough oxygen. The adrenaline production causes their blood sugar level to rise, which can eventually lead to diabetes. Loud, frequent snoring can also put a damper on marital relations, especially if it results in the couple sleeping in separate bedrooms.

How You Can Prevent Snoring

Once you and your doctor have ruled out sleep apnea, anatomical problems or other health issues as causes of snoring, the condition can usually be prevented by non-invasive, lifestyle-based methods. These include losing weight, quitting smoking, avoiding alcohol and heavy meals before bedtime, and changing medications when they cause snoring. Also, sleeping on your side and propping up your head a few inches with pillows may ease snoring.

In addition, you may want to try using one or more of the following anti-snoring aids.

For additional information on causes of snoring and potential remedies, please see the articles listed below.