Restless legs syndrome or RLS is a neurological condition that creates a constant, uncontrollable urge to move your legs. This intensive urge typically occurs in the evenings and can severely impede your ability to fall asleep and stay asleep. Affecting up to 10 percent of the population, RLS also produces unpleasant leg sensations that are typically described as a twitching, tugging, crawling, creeping or pulling.

The exact cause of RLS isn't known and research is ongoing to uncover the source of the disorder. Scientists have found that RLS may be a genetically disposed condition. It also presents itself in tandem with other health issues.

Anemia, low iron levels, end-stage renal disease, attention deficit disorder, and damage to the peripheral nervous system are all associated with RLS. In addition, studies have shown that a disproportionate number of women develop RLS during pregnancy.

RLS can effect people of any age and gender, though women and seniors seem to be more prone to developing symptoms.

As you now know, the major symptom of RLS is an intense and unmanageable desire to move your legs. You experience an inability to sit still, or at peace. The lower part of the leg around the calf is usually  affected, but sometimes the thigh, or even the arms, can feel the same uncontrollable sensations.

RLS symptoms usually begin in the evening and get worse as the night wears on. However, they can also appear at any time of the day, particularly during periods of inactivity.

The types of sensations, and their severity, vary from person to person. For some people, restless legs syndrome is merely irritating, for others it can be a major issue leading to chronic insomnia and its associated health problems.

The duration and pattern of RLS symptoms appear to be equally random. For some, the condition will worsen over time, for others it may remain fairly constant. The discomfort may come and go (sometimes disappearing for months or even years), but may return unexpectedly at some later date.

Here is the RLS diagnosis criteria: 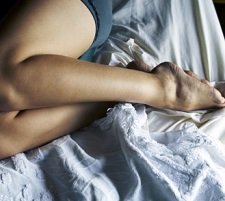 How is RLS Treated?

If you think you have the symptoms of restless legs, see your doctor right away. He or she will review your medical history, complete a diagnostic exam, give you a physical, and may order a sleep test to confirm a diagnosis. Once all the data is collected, your doctor will recommend a treatment regime to help you effectively manage the disorder.

There are four common drug types that are prescribed for restless legs  syndrome. These include dopaminergic agents, sedatives, anti-convulsants and pain relievers. There are also a number natural, behavioral and lifestyle-based options to consider.

An iron deficiency in your body can exacerbate symptoms of RLS so you may want to talk with your doctor about your iron levels. After running blood tests that indicate iron deficiency anemia, he or she may recommend taking iron supplements. Your doctor will advise dosage levels and perform follow-up testing.

Other initiatives that are known to help alleviate RLS discomfort include taking a daily vitamin/mineral supplement; cutting out alcohol, tobacco and caffeine; and eating more bananas, leafy green vegetables, and lean meat.

Physical activity and regular exercise, including knee bends, ankle rotations and calf stretches, can help. Yoga, relaxation exercises, and massage have reduced symptoms for some individuals.

In addition, talk with your doctor about medications you are currently taking that may be intensifying your RLS condition.